THE GOLDEN RULE AND THE SDG’S 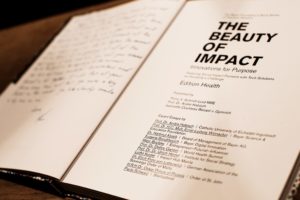 Throughout my life, my father and greatest mentor always said, “Treat others as you would like to be treated.” To this day, he continues to show me the way through his example.
As a serial entrepreneur, I have been involved in many companies and several international family businesses. Today, I am striving to reform the agriculture, food, and beverage indus- tries. I speak globally on climate change and show entrepreneurs how to build resilient, sustainable, and profitable businesses. I help support companies in their renewable transition, specializing in systems, recy- cling, packaging, organics, raw, and vegan products. But it was not until I had inflicted and experienced many hardships that I woke up and appreciated my father’s wisdom and example.
His Golden Rule is not something new or only known to him: It has been the bedrock of humanity for over 3,000 years, and can be found in the most successful cultures and religions. It has been cited throughout the ages by leaders and philosophers as the guiding principle of human interaction.
The same Golden Rule also supports the United Nation’s Sustainable Development Goals (SDGs): treat others and the planet as you wish to be treated.
We have long since left the Goldilocks, or Garden of Eden, state and moved into one beyond the limits of growth. We are living with a deficit of finite planetary resources in a phase of new, unknown, and unpredictable climate change.
In 2017, Earth Overshoot Day—the day on which we have used more from nature than our planet can renew in the whole year—fell on August 2, the earliest date it has fallen on since calculations began in the early 1970s. For the rest of the year, humanity maintains its ecological deficit by using resource stocks and accumulating carbon dioxide in the atmosphere. As a result, there is little guarantee we can avoid climate change calamities.
It is important we understand and begin to see SDGs as a component of a holistic system that will help us to transition to a resilient, sustainable future.
The goals are the largest open consultation ever held, and represent a tremendous opportunity to again make humanity aware of the Golden Rule as a guiding principle. They were agreed by 196 countries at the 2015 UN Climate Change Conference in Paris and aim to enable us to meet the goal of the conference—known as the Paris Agreement—to keep global warming below 1.5 degrees by 2030.
The goals are: no poverty; zero hunger; good health and well-being; quality education; gender equality; clean water and sanitation; affordable
and clean energy; decent work and economic growth; industry, innovation and infrastructure; reduced inequalities; sustainable cities and communities; responsible consumption and production; climate action; life below water; life on land; peace, justice, and strong institutions; and partnerships for the goals.

They are often depicted in a linear poster, but that may disguise the fact that they must be achieved within the safe operating space of a resilient and stable planet. We need to transition the planet into a safe operating space. Looking at an exponentially growing problem in a linear way may not be the best way to understand it. In the same way that Maslow’s hierarchy of needs depicts our physiological needs, it is helpful to look at the SDGs in the guise of a wedding cake, as devised by Johan Rockström, Executive Director of Stockholm Resilience Centre, and Chairman of the EAT Advisory Board, and Pavan Sukhdev, Founder and CEO of Gist Advisory.
The base layer is the biosphere: life on land; life below water; clean water and sanitation; and climate action. The central layer contains society: no poverty; sustainable cities and communities; peace, justice, and strong institutions; affordable and clean energy; good health and well-being; quality education; gender equality; and zero hunger. The top layer is the economy: decent work and economic growth; industry, innovation, and infrastructure; reduced inequalities; and responsible consumption and production. And at the pinnacle is partnership to attain the goals.
This shows how all the SDGs are directly or indirectly connected to sustainable and healthy food. It is a paradigm shift to see our planet as non-negotiable, and not as a factor that limits prosperity, transformation, and success.
It proves that food is a prerequisite for success. If we can succeed with food, we will succeed for all people and also for our planet.
More specifically, the wedding cake shows how global food reform can affect the whole planet. The agriculture, food, and beverage industries are the greatest strain on natural resources and on the health and well- being of everyone on Earth. The majority of the food we grow first goes to feed cars, then animals, and lastly humanity. Our food is creating a pandemic of obesity, diabetes, asthma, heart, and other health problems. The fossil fuels and refrigerants we use to produce and transport these products are a bigger emitter of greenhouse gasses than the oil and gas industry, and are keeping that industry in business.
The packaging for food is causing biodiversity loss in our oceans and contamination on land. Globally, thirty percent of all food produced is wasted or thrown away before it is consumed. If we dispose of this waste by burying it as landfill, it comes back to bite us as methane, which is seventy times more powerful at trapping heat than carbon dioxide. Even if this waste is burned or dumped into water, the long-term results are not much better. There is a third component to this.
The Paris Agreement and the SDGs are not the only things that are required to keep global warming below 1.5 degrees by 2030. An economic and financial figure was agreed as well: to invest 90 trillion USD worldwide in sustainable developments in infrastructure, including private and public energy, transport, and water by 2030. These climate-friendly investments will pay for themselves in the medium to longterm, and will ensure that we reach our 2030 goals. This figure represents 6 trillion USD per year from 2015. We fell 700 billion USD short of 1 trillion USD in the first year, and 200 billion USD short in 2016. However, we are on track to break 1 trillion USD in 2017, which will still leave us 17 trillion USD behind in sustainable developments for 2018.
As well as needing to understand the SDGs properly, we need to put the 90 trillion USD by 2030 into perspective. The UN predicts that there will be 8.5 billion people on the planet by 2030; this represents a spending of about 10,500 USD per person, or 882 USD per person per month for one year.
It is also important to understand the resources required to sustain one human life to a normal life expectancy in 2017. This has been calculated at 1.6 global hectares (a global hectare is an expression of ecological footprint and biocapacity). Since August 2, 2017 we have been using 2.87 global hectares per person, which represents a deficit of 1.17 global hectares per person. If we continue with business as usual, human demand on the Earth’s ecosystems is projected to exceed what nature can regenerate by about seventy-five percent by 2020. Similarly, if we continue on our current path, the Global Commission on the Economy and Climate projects that the world will invest 89 trillion USD by 2030 regardless, most of which will be spent on insurance and emergency response—essentially Band-Aids for high-carbon, climate-damaging businesses.
By investing the 90 trillion USD in resilient, sustainable infrastructures and low-carbon, renewable projects, we would have an additional 14 trillion USD investment with long-term returns that will support 8.5 billion people by 2030.

It’s been business as usual for too long. We need to stop and reverse global warming now!

The top three things we can do to stop and reverse global warming are:

I encourage you to dive deeper into this publication and do all you can to live The Golden Rule, and treat others and the planet as you would wish to be treated.

I have selected two of the projects featured for the way they represent the SDGs: Refugee First Response Center— Telemedicine in Crisis Areas and Coolar. Because of climate change we are seeing tens of millions of refugees. We need an infrastructure to support and transition them from camps into a brighter future.

The Refugee First Response Center meets three of the SDGs and is an excellent tool to bridge the transformation in a complex, multifaceted, global migration problem.

We can stop and reverse global warming by rethinking refrigerants. Every refrigerator and air conditioner contains chemical refrigerants that absorb and release heat to enable chilling. Refrigerants, specifically CFCs and HCFCs, were once culprits in depleting the ozone layer. Thanks to the 1987 Montreal Protocol, they have been phased out. HFCs, the primary replacement, spare the ozone layer, but have 1,000 to 9,000 times greater capacity to warm the atmosphere than carbon dioxide. Coolar makes sure this is not the case by containing no chemical refrigerants and by using heat instead of electricity. Coolar is cooler!